If you were immortal, what would you do with your time? For some it would be to travel the world, perhaps live in every place at least once. Maybe you would want to spend more time doing something that you love. Others maybe clueless because that’s A LOT of time, eternal, actually, so what else is there? For me, it’s reading. Reading all books that were ever published, or at least the fiction ones, but I guess if I get desperate, I’ll just suck it up and read some non-fiction.

As a writer, I believe it’s important that I also be a reader, and for anyone who knows me, that I am for sure. Reading serves several purposes for me. One is for plain old inspiration to get myself into gear and write. Another is to see how other authors spin their stories. How do they go about setting the plot and the tone, describing their characters in time and space, as well as weaving the story itself into one amazing tale? It also helps to expand my vocabulary, perhaps learning new words to use in my own story. And of course, it’s my favorite past time, helping me escape to a different world if for an hour or two.

So not only do I write for you, my followers, I will also be reading for you as well. I have read many books in the past, and some will be recent. I love hearing from you, so let me know what you think and also I am open to suggestions on what you would recommend.

Perhaps on here you’ll find your next read!

It was late in 2009, I believe, when I was in a Barnes & Nobles and I caught a glimpse of all the new releases on display at the front entrance of the store. I saw the title “Girl with the Dragon Tattoo,’and really didn’t think much of it. But a curious part of my mind always remembered that title. And soon, other titles starting being released much later on which were “The Girl who Played with Fire” and “The Girl who kicked the Hornet’s Nest.” I learned the Swedish author of these books Stieg Larsson, had his work published posthumously and was translated from his native language into English.

It wasn’t until later in 2010, when I saw the movie for the first book come out, so I watched it without reading. I know this is not a movie review, but I thought it’d be appropriate to at least compare the two.. I was thoroughly impressed with the movie and in quick succession, I ended up watching all three in a period of 6 months I believe. In May of this past year, I received, as a gift, the Millennium Trilogy which is what the entire collection is called. It took me two months to read all three books!

The movie and the book’s opening scenes started exactly the same way, and throughout ‘Girl with the Dragon Tattoo’ the movie stayed true to the book and vice versa. I don’t’ mind watching movies with subtitles, because the entire film was in Swedish. There were a few sentences that translated a bit differently, but I still could understand what it conveyed. Now, I will tell you this: The book, as well as the movie is graphic, violent, and raw in nature. The movie had great cinematography and wonderful acting. So as I was reading the book, I was able to picture things in my mind from what I garnered from the movie. There are some scenes that if you are faint of heart or troubled in some way, you won’t like it.

The main female character, Lisbeth Salander, translated very well from the book into the movie, as if the actress who played the part was born for it. In both the movie and the book, she’s moody, introverted, misunderstood, incredibly intelligent and troubled. The main male character, Mikael Blomkvist, also is more or less the same in both. He’s analytical, calculating, curious and doesn’t give up until he finds what he’s looking for. Well, it’s only natural to be that way because he’s a reporter for the publication he owns ‘Millennium Magazine.’ Interesting is that is also the name of the collection of books I mentioned. The only thing in the book (without giving away spoilers) is that he’s more of a womanizer than he is in the movie. The book spends more time delving into his sexual conquests. But that didn’t detract from the fact that I really, truly loved his character in both medias. In the book, he amused me a lot because of the way he is with his perseverance and persistence, it was just uncanny. The book goes more into Lisbeth’s world of hacking, a talent she basically learns on her own, if I remember correctly and it’s the talent she uses to help Blomkvist with a murder mystery he got lured in by a rich powerful to help solve. I fine the awkward romance between Salander and Blomkvist quite amusing, even cute at times.

The book takes incredible twists and turns in the plot and goes deeper and deeper into the heart of the matter, much like peeling layers of an onion. You pull one back and there’s another layer, then another….you really really have to pay attention when reading and even watching the movie. It’s also like putting together pieces of a puzzle and at the end of it all, the picture is not pretty. You will be deeply drawn into the plot, wanting to know what happens and the ending will blow your mind.. 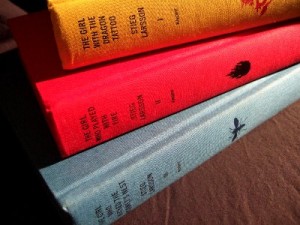